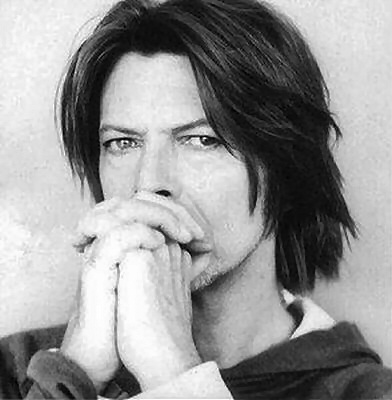 After he died on January 10 of last year, a half-serious Unified Field Theory of David Bowie began making the rounds on the web, inspired by the belief that his death was the first domino in a cosmic chain that included the deaths of Prince, Leonard Cohen, and Alan Rickman, not to mention Brexit, a flurry of terrorist attacks, and the coming of the Trump presidency. “David Bowie was the glue holding the universe together,” a forlorn fan tweeted.
¤
Bowie invites biblical exegesis partly because his work is thick with religious imagery and occult references, but also because his use of William S. Burroughs’s cut-up method to create oblique, free-associated lyrics turns his songs into “writerly” texts, as Roland Barthes would say — intentionally “incomplete” works that beckon us to fill in their gaps, collaborating in the act of making meaning. “I come from almost a traditional school now of deconstructing phrases and constructing them again in what is considered a random way,” Bowie told an interviewer, who replied, “So you’d be very happy if I and another journalist had different ideas of what the songs were about?” Said Bowie, “Absolutely. As Roland Barthes said in the mid ’60s, that was the way interpretation would start to flow. It would begin with society and culture itself. The author becomes really a trigger.”