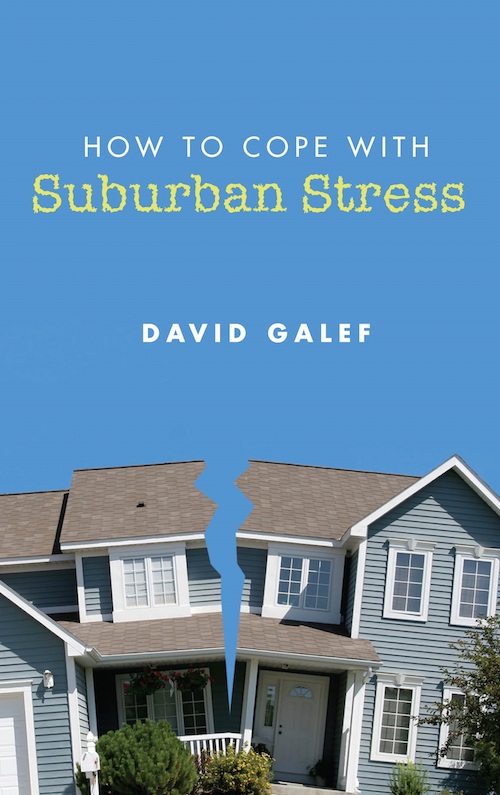 How To Cope With Suburban Stress

Welcome to the affluent suburb of Fairchester, where psychiatrist Michael Eisler has compiled a list of reasons to leave his family. His high-powered executive wife, Jane, treats him like furniture, except when they argue over their maddeningly precocious son, Alex. But Michael knows that unless he cleans up his own act, he’ll just carry his problems with him when he leaves. He resolves to change—into a sensitive guy, a strong man, a comedian—whatever it’ll take to win over his wife and re-consummate their relationship.

What Michael doesn’t know is that a pedophile has moved into town, a computer geek who fixes his sights on Alex. What happens next is the stuff of suburban nightmare, especially when it turns out that Michael isn’t the only one who’s thought of leaving. How to Cope with Suburban Stress draws a darkly comic portrait of sexuality in the suburbs and the life of noisy desperation that so many of us lead now.

The wisecracking title scarcely hints at the depths of fear, grief, and guilt plumbed with relentless energy in Galef’s latest. Its dual narrative tracks the parallel ordeals of Michael Eisler, a psychiatrist who resides in the upscale suburb of Fairchester and cultivates fantasies of leaving his “take-charge executive” spouse, Jane, and Ted Sacks, a computer-geek pedophile whose dreamy pursuit of nubile preadolescent boys gradually focuses on Michael and Jane’s “advanced,” moody, seven-year-old, Alex. Galef chronicles in generous and stinging detail Michael’s sullen marital unhappiness (he’s convinced the imperious Jane is also unfaithful), his addled relations with troubled patients and his awkward failure either to discipline or reach Alex—who gradually emerges as a confounding mixture of sweetness and implacable cussedness. Meanwhile, the sad tale of Ted Sack’s own victimization by his hateful father shadows and shapes his path to becoming an emotionless predator trolling X-rated websites and joining in lubricious chat-room exchanges, fuelling his chaotic sexual urges with junk food and kiddie-oriented paraphernalia, and—through a series of coincidental encounters—forging an acquaintance with Alex, when the boy, desperate to escape Michael’s oppressive close parenting, turns to “the man in the gray slacks,” who appears to be his only friend. The decisive action, which begins at a skating rink and climaxes in Ted’s dingy apartment, will scare the bejeezus out of anyone who has ever been a parent. Risky material met head on, in a courageous book that displays Galef’s considerable skills quite brilliantly. Prepare yourself for a rough ride—but don’t miss this one.
—Kirkus (a starred review)

Take one of John Cheever’s more idyllic stories—hell, make it the perfect life of the Bobbsey Twins—and splice in the eerie, relentless world of Thomas Harris, and you’ll enter the arena of How to Cope with Suburban Stress. Part psychological thriller, part snapshot of a modern marriage’s inevitable atrophy, this is a novel that Nietzsche might’ve had in mind while pondering Good and Evil. Galef offers the reader a perfect vision in regards to obsession, patience, and family, in this puzzling time in which we live.
—George Singleton