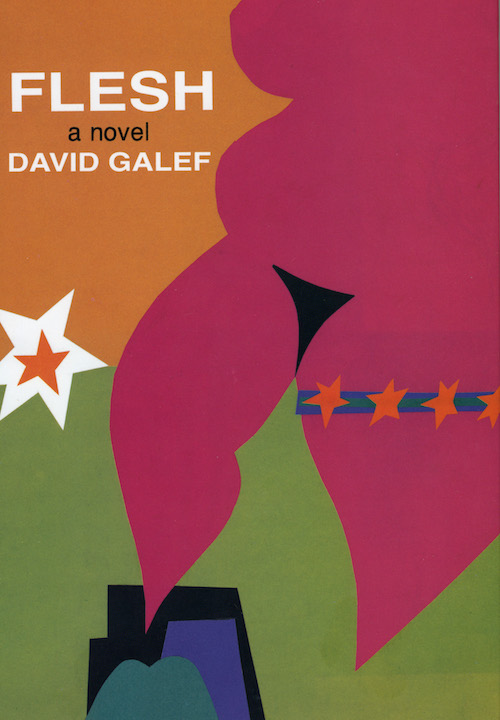 This satirical novel chronicles the “great fleshly quest” of Max, a teacher whose outrageous sexual behavior involves portly women. Max arrives in Mississippi to teach history at Ole Miss and rents an apartment next to the narrator, Don, and his wife. Don, an English professor, becomes entangled with Max’s clandestine behavior as he craftily constructs a peephole in Max’s bedroom. Max romances women in great numbers until he meets his fantasy, a 400-pound Brunhild named Maxine, who becomes involved in Max’s bizarre death. Although the plot stretches into the absurd, Galef’s story raises serious questions about our culture’s obsession with bodies. Galef’s candid reflections on Southern culture, his entertaining lampoon of academic manners, and his supporting characters are as uproarious and engaging as his ribald plot. An accomplished debut worth noting.

Flesh is a constantly pleasurable experience to read; it possesses in abundance style and intelligence, and above all a huge zest for life. It’s good to find a new American novel that doesn’t either apologise, with earnest political correctness, for its sexuality, nor trivialize it into a mere recreation. If you respect and enjoy flesh, so that you want more and more of its abundance—read it.
—D. M. Thomas

A witty first novel in which an English professor recounts his fascination with a charismatic colleague’s sexual obsession (big women) and the depths to which it leads them both. Well written and cleverly executed.
—Kirkus Reviews

A witty portrayal of the petty politics, incessant gossip, and sexual shenanigans in a small-town academic community. Inventive and unpredictable, it’s also one of the funniest novels I’ve read in years.
—Greg Johnson

Galef, himself a tenured professor, writes knowingly of the academic scene, sparing no one, and shedding a whole new light on the subtleties of male bonding. His funny, insightful narrative is peppered with wonderfully erudite diction and literary accents.
—Publishers Weekly

Galef’s candid reflections on Southern culture, his entertaining lampoon of academic manners, and his supporting characters are as uproarious and engaging as his ribald plot. An accomplished debut worth noting. Recommended for all collections.
—Library Journal

As a fan of academic novels, David Galef has read the likes of Kingsley Amis, David Lodge, and Cathleen Schine. He often uses Lucky Jim in his classes at the University of Mississippi. So when he decided to write his first novel, it was no surprise that he turned to what he knows best. The result is Flesh, a satire of academic politics and life in a Southern town. It’s clear that it may appeal to several audiences, including readers of academic novels and of Southern fiction.
—The Chronicle of Higher Education

What Galef creates when he looses this bizarre lust on a world of mannerly Southern academics is an outrageously funny and learnedly sly first novel….
—Southern Living

A tremendous amount of wry—and often quite funny—observation about the equally weird worlds of academia and Mississippi, worlds that the author mixes into a strange sardonic brew.
—The Commercial Appeal